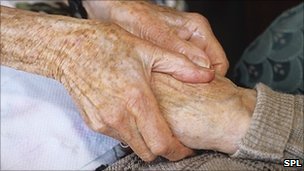 Some actions that do not lead to criminal charges may still lead to complaints, the GMC says

Guidance on how to deal with complaints against doctors who may have assisted in suicides will be published by the General Medical Council.

The GMC's investigation committee and case examiners will be advised about what action to take over such allegations.

There will be a public consultation after draft guidance is published.

Campaign groups say there is ambiguity about what healthcare professionals can do when a patient asks for help to die.

The move comes after a patient asked the GMC what advice or support doctors could give patients who were considering ending their lives.

Niall Dickson, chief executive of the GMC, said: "We already have clear guidance for doctors that they must always act within the law and assisting or encouraging suicide remains a criminal offence."

But he said there was a range of actions that could be considered assisting in a suicide, such as giving information on suicide or providing practical assistance for someone to go to a facility such as Dignitas.

"Some of these actions may not lead to criminal charges but may still lead to complaints to us about a doctor's fitness to practise," he said.

The guidance will not cover euthanasia - where a doctor's actions lead to a patient's death - already covered by existing advice.

A spokeswoman for the campaign group Dignity in Dying said: "There is still a great deal of ambiguity around what healthcare professionals can and cannot do when a patient asks for help to die.

"Whilst the new guidance for fitness to practice will not change the legal position for doctors and patients, we welcome the intention to set out clearly how complaints regarding assisted suicide will be dealt with by the GMC."